Here is a category about Katy Hudson, like Katy Perry originally called herself, with questions about her many roles as singer, songwriter, actress, television judge and businesswoman .

You probably know her hits "I Kissed a Girl", "California Girls" and "ET ", but did you also know that she won the 2015 Guinness World Record for most Twitter followers and became the first person to gain 100 million followers on the site in June 2017.

If you know of Katy Perry and her career, you are probably better than your friends and family in this category. 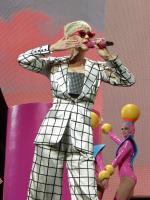